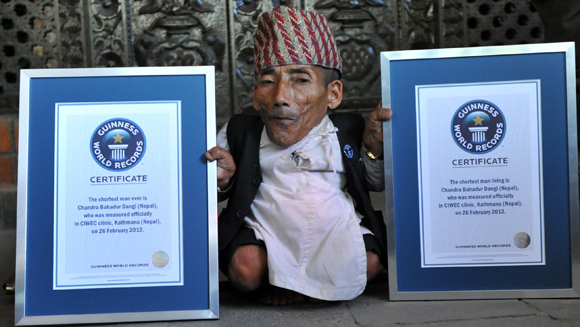 Dangi-Ba posing with the Guinness Certificate

Having the World’s highest peak in the world, this week Nepal got another record with World’s Shortest man. Guinness World Record confirmed the tininess of 72 year old Chandra Bahadur Dangi, of 22 inch Height.In this blog, I am talking about the Interview of Chandra Bahadur Dangi shown live on Nepal Television’s program Samaye Sandarva. Photo-Journalist Prakash Mathema and Chandra Bahadur’s Nephew Dolak Dangi were also present in the show. You Could find some unknown and interesting facts about his personal life, and how he came to light in the video. Speaking with his high pitched voice and sometimes inaudible, he expressed his innocent feelings for getting the title with “ramro thikai lagyo”, “Khusi lagyo”, “ramro khusi lagyo”(felt good, felt happy, felt good happy).

Here are some other interesting facts in the Video:
->He has six brothers with four of them being elders and none of the brothers are like him.
->He likes Milk-rice, fruits and meats, but he doesnot like alcohol.
->He is never married and even doesnot feel like marrying.
->He used to have long hair which met the ground and cut later for the reason that he had to comb it everyday.
->He once met Khagendra Thapa Magar (Worlds shortest man 2010) in Salyan, Shreenagar but they didnot have a talk there as khagendra was not giving him any attention.
->Asked if he knew “Thulo” manche ( Big personality) in Nepal, he told he knew Baburam Bhattarai and Prachanda (to whom he even wants to meet),but he didn’t know the Prime Minister of Nepal.
->He never took any medicine in his whole life.
->He is all fit to be the shortest man for many years to come.
->He repeatly told “ramro”, “ramrai” many times for the questions he was asked.
->When searched in google with Chandra Bahadur Dangi, it gives “About 2,140,000 results (0.24 seconds)”, look how popular Dangi-ba is getting now.

He even played madal, and sang a song in the show.