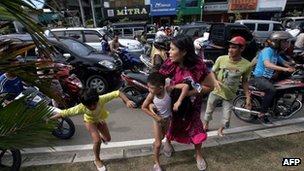 A powerful 8.6 magnitude earthquake and strong aftershocks struck off Indonesia on Wednesday, sending people as far away as southern India scurrying from buildings and raising fears of a disastrous tsunami as in 2004. 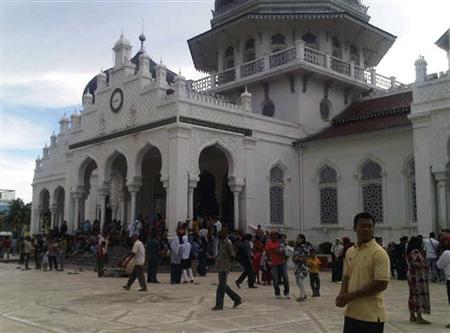 Indonesian President Susilo Bambang Yudhoyono said there were no immediate reports of casualties or damage in Aceh, the Indonesian province closest to the initial earthquake. But an aftershock of almost the same magnitude, less deep that the first quake, hit soon after he finished speaking.

The Pacific Tsunami Warning Center issued fresh tsunami warnings for the entire Indian Ocean after the aftershocks. Authorities in Indonesia said there were reports of sea-levels rising off Aceh, but by less than a metre (3.3 feet).

But authorities in India’s Andaman and Nicobar islands, to the north of where the quakes struck, said waves of up to 3.9 metres (13 feet) could hit there.

Individual countries, including Thailand, Indonesia, Sri Lanka and India, issued their own tsunami warnings and people near the coast in six Thai provinces were ordered to move to higher ground. Authorities shut down the international airport in the Thai beach resort province of Phuket.

The quakes were about 300 miles southwest of the city of Banda Aceh, on the northern tip of Indonesia’s Sumatra island, the U.S. Geological survey said. The first was at a depth of 20.5 miles.

Indonesia’s disaster management agency said power was down in Aceh province and people were gathering on high ground as sirens warned of the danger.

“The electricity is down, there are traffic jams to access higher ground. Sirens and Koran recitals from mosques are everywhere,” said Sutopo, spokesman for the agency.

Yudhoyono, speaking after the first quake, said there were no signs of a disaster.

“There is no tsunami threat although we are on alert,” said he said at a joint news conference in Jakarta with visiting British Prime Minister David Cameron, who said Britain was standing ready to help if needed.

“The situation in Aceh is under control, there’s a little bit of panic but people can go to higher ground,” Yudhoyono said.

Warning sirens rang out across the Thai island of Phuket, a tourist hotspot that was one of the worst hit areas in the 2004 tsunami.

“Guests from expensive hotels overlooking Phuket’s beaches were evacuated to the hills behind and local people were driving away in cars and on motorcycles. Everyone seemed quite calm, the warning had been issued well in advance,” freelance journalist Apichai Thonoy told Reuters by telephone.

OUT ON THE STREETS

Indonesian television showed people gathering in mosques in Banda Aceh. Many others were on the streets, holding crying children.

In the city of Medan, a hospital evacuated patients, who were wheeled out on beds and in wheelchairs.

Yudhoyono said he had ordered a disaster relief team to fly to Aceh, which was devastated by the 9.1 magnitude 2004 quake, which sent huge tsunami waves crashing into Sumatra, where 170,000 people were killed, and across the Indian Ocean.

In all, the 2004 tsunami killed about 230,000 people in 13 Indian Ocean countries, including Thailand, Sri Lanka and India.

Wednesday’s quakes were felt as far away as the Thai capital, Bangkok, and in southern India, hundreds of office workers in the city of Bangalore left their buildings while the port of Chennai closed down because of tsunami fears.

The quakes were in roughly in the same area as the 2004 quake, which was at a depth of 18 miles along a fault line running under the Indian Ocean, off western Indonesia and up into the Bay of Bengal.

One expert told the BBC at least Wednesday’s first quake was a “strike-slip” fault, meaning a more horizontal shift of the ground under the sea as opposed to a sudden vertical shift, and less risk of a large displacement of water triggering a tsunami.

The quakes were also felt in Sri Lanka, where office workers in the capital, Colombo, fled their offices.

Mahinda Amaraweera, Sri Lanka’s minister for disaster management, called for calm while advising people near the coast to seek safety.

“I urge the people not to panic. We have time if there is a tsunami going to come. So please evacuate if you are in the coastal area and move to safer places,” Amaraweera told a private television channel.